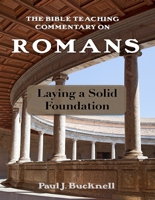 Every Bible book including Romans has its specialized purposes. The Book of Romans was designed to lay a solid foundation for our Christian faith. If the foundation is built right, then the whole building (the Christian life) can be strong. The Apostle Paul shows how the death and resurrection of Jesus Christ provides a perfect solution for man's problem whether he be Jew or Gentile.

This is the first of three parts summarizing the Book of Romans discussing the introduction of Romans as well as sections Romans 1:1-7 and 1:18 to 3:20.

A Summary of the Book of Romans

The Book of Romans reveals God's great plan to establish His righteousness throughout the earth through the Gospel of Christ. The 30 times the word 'righteousness' is used in Romans only partly reveals the importance of this theme. When we add the Greek root word for righteousness ('diakai'), which includes words like 'justification' and 'justify,' the number of usages increase to over 50 times. (This even includes Romans 6:7 the word 'freed' really means acquitted or declared righteous.)

God is ultimately concerned with restoring righteousness to man so that He can fellowship with man and work with Him in accomplishing His purposes. Man was unable to fix his sin problem so the Lord Himself devised a redemptive plan known as the Gospel. Through the second Adam, Christ, God restored what the first Adam lost. Man's sin and guilt stirred up God's wrath against mankind. God revealed His divine plan to recover what the evil one destroyed so that His great Name is glorified through the display of His wisdom, power and grace.

Purposes of the Book of Romans

What is Paul's purpose for writing the Book of Romans? Let us observe three main purposes.

These three themes will be developed as each of the six main portions of the Book of Romans is presented according to the outline.

God's righteousness is shown
through the glorious Gospel of Jesus Christ.

In this first section Paul defines the Gospel. Paul answers the question, "What is the gospel and how does it help us?" The Gospel is clearly set out for us in 1:2-6. The word 'gospel' (lit. good tidings or news) is used 4 out of 10 times in this first section (1:1,9,15,16). In essence, it is all about the life and work of Jesus Christ who died on our behalf, now has come alive and through the Holy Spirt lives and reigns in the life of every one who believes in Christ.

These believers now in communion with their Lord are called 'saints' or the church (lit. called out ones) which Paul personally addresses in the closing (Romans 16:1,4,5,16,23).

Paul's preaching to the Gentiles caused much friction among the Jewish people. Some of these Jewish people believed, but their faith was strongly challenged by Paul's outspoken opponents. The validity of preaching the gospel to the Gentiles (non-Jews) becomes a major theme through Romans. The apostle does not merely defend his actions, though, but shows that bringing the Gospel to the nations all along was part of God's great plan (chapters 9-11), the great mystery that is finally revealed to us. "I am under obligation both to Greeks and to barbarians, both to the wise and to the foolish" (Romans 1:14).

"Thus, for my part, I am eager to preach the gospel to you also who are in Rome. For I am not ashamed of the gospel, for it is the power of God for salvation to everyone who believes, to the Jew first and also to the Greek. For in it the righteousness of God is revealed from faith to faith; as it is written, "BUT THE RIGHTEOUS man SHALL LIVE BY FAITH."" (Romans 1:15-17).

The gospel, then, is the very power of God for salvation. The great news about what Jesus did in His person and work on the cross becomes the means by which those who believe, whether Jew or Gentile, are saved and live out a life for the Lord. In verse 17 Paul articulates how our needed righteousness from God is found in Christ. In other words, those who live by faith find the needed righteousness in Christ so that they can come into God's presence. God's righteous expression against our sins is satisfied through the death of His only Son, Christ Jesus.

"BUT THE RIGHTEOUS MAN SHALL LIVE BY FAITH."

This Gospel, this offer of true righteousness, is freely offered to all. This is the place to discover the long lost righteousness that kept us from communing with God and participating in His good will. Paul is not ashamed of what gives life and liberty and neither should we.

Man's sin and guilt is evident
through its presence and judgment.

Man is not righteous. He opposes God's righteousness. This is clearly not only an issue of what has happened in the Garden but with the very choices man makes today in a postmodern society.

In Romans 1:18-3:20 Paul answers the question, "Why does man need God's provided righteousness?" If the Gospel shows us the way we are to find that needed righteousness, that is fine, but what if man does not believe obtaining God's righteousness is important? Without a firm conviction of his need before God with regard to the heinousness of his sin, man will never find search or find the forgiveness that the Lord offers in the gospel offer. He does not think that he is that bad and that God's righteousness is needed to commune with Him.

Paul jumps in and reveals man's evident guilt. He does not only show mens' unrighteousness but how they resist God's display of righteousness. Man suppresses the truth. He does not accept it. When humankind rejects the truth, it reveals that he is not even open to acquiring the truth. Many argue that if man knew better then he would act better, but Paul shows this argument is faulty. This is true for the Gentiles in general but also with the Jews who had God's law but rejected it. So whether we have general revelation (nature or conscience) or special revelations (scriptures) from God, man will turn away and an ensuing judgment will come upon him, depending on how much truth he has rejected.

Those who are self-righteous, however, believe they are different from those mentioned in chapter 1. They are better. They will agree that those others should be judged, but it is here that Paul catches them. Everyone will be prosecuted. Even the self–righteous are liable for their sins before God. Paul then presents argument after argument showing that man will be judged by their deeds and not by their religion, their connections, their circumcision, etc. Chapter one focuses on those with open sinful lifestyles. Romans 2:1-11 catches those who exclude themselves from that first category because of the more religious or moral tone of their lives.

In case they do not catch on, the apostle in 2:5-11 clarifies God's means of judgment. Man will reap what he has sown. Man has a will. All his actions have been recorded and will be accordingly rewarded dependent upon if they are good or evil. Do you measure up? No one does but Jesus. God is just and will not use two different standards and thus eliminates the excuses the self-righteous often rely on. In the following verses Paul provides even more arguments how their reliance on the Law will not help.

Romans 2:12-29 reveals the weaknesses of three false confidences the Jews might place their hope in. They are not to depend on their knowledge of the Law, their heritage (their name) or their belonging to the covenant (marked by circumcision). Doing good works or belonging to the people of God does not make a person righteous. By revealing their lack of righteousness in light of the demand for upright living, Paul wants them to find Christ who can be their righteousness.

Just when we think Paul has stated enough, he continues on to present his powerful conclusion in 3:1-20 by asking and answering five questions. Paul systematically crushes any work or means apart from Christ that Jew or Gentile might depend upon for salvation. False ideas keep people from finding the Savior Jesus Christ.

Lastly, he concludes with a description of mankind in his sinfulness. No one will find righteousness through the Law. The law only reveals our sin.

"Because by the works of the Law no flesh will be justified in His sight; for through the Law comes the knowledge of sin" (Romans 3:20).

It is good to know that God did not stop here declaring our guilt but went on showing us the solution to our sin and guilt!

Continue on to the second summary.

God’s great plan to establish His righteousness throughout the earth is accomplished through the Gospel of Christ.

Are you a strong Christian?

Biblial teaching makes us strong as believers because we are able to comprehend the teachings, the truths of God's Word, enabling ourselves more easily to use our will to obey them. Clear reasoning enables the believer to reckon them as true and therefore, but not always (there is always the sin of pride that can interfere), is able to stand strong.

What areas of obedience hold you back from being filled with God's Spirit and blessing? Take one area now and change. What teaching from the scripture is involved?